Through Mudshine Films, Virginia Pitts runs collaborative workshops for screenwriters, filmmakers and film students. These workshops provide hands on experience of directing actors and explore how improvisation and musicality can enhance many aspects of the writing, development and filmmaking processes. The workshops are tailored to suit your needs.  So far, the workshops have taken place in the UK, France, Finland and Aotearoa New Zealand. If you would like to discuss a potential workshop series with Virginia, please contact her here. You can download this web page as a printable PDF here. 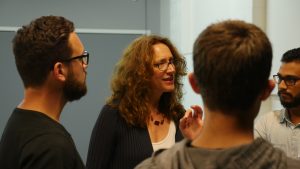 In 2016 AND 2018, Virginia ran workshop series at SAE, Auckland. The first three workshops, each preceded by a talk to introduce the main ideas, covered Improvisation to Devise & Develop Screenplays, Improvisation in the Rehearsal Room, and Improvisation as a Performance Technique. In the practical sessions, Virginia worked with professional actors to demonstrate various collaborative and directing techniques, then invited students to participate and step into the directorial role.  The fourth session was a talk and screening of clips comparing improvised and scripted performance for screen. This was drawn from an artistic research project undertaken by Virginia in the UK.

“The most important thing I learned was how to direct actors by giving them motivations, subtext and scenarios to work with rather than ‘result directing’” – anonymous

“The subtle differences in actors’ performances when using different improvisation techniques made a real impact on me. Virginia created an environment comfortable enough for us to get involved and participate” – Zaza

The most useful thing I learned was how to communicate with actors and devise different improvisation scenarios to change the scripted scene. Practical implementation of what was discussed in the lecture was awesome! – Darrell Green

“I really liked Virginia’s energy and confidence – everything she explained and demonstrated to us felt so relevant, and now I know that improvisation is not only useful but really enjoyable”  – Clara N’Diaije

“I liked Virginia’s calm, easy and comfortable approach in the practical workshops. And the screenings comparing scripted and improvised performance were really valuable to me in planning my next film”  – Nicole Chen 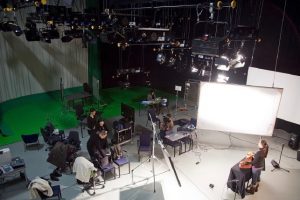 Day 1 began with a research seminar, some of which was drawn from an article written by Virginia, downloadable here. Following that was a workshop to brainstorm characters and story ideas, which were then broken down into a series of ‘movements’ (rather than acts) and labelled with words chosen to invite a composer to respond. On Day 2, Taren composed a series of musical ‘sketches’ triggered by these words as well as brief character notes. On Day 3, these ‘sketches’ were played repeatedly, with  workshop participants auto-writing while listening to the music.  From the freedom of auto-writing, multiple ideas arose to develop the story, characters, and imagery – including internal monologues, specific plot points, conflicts, connections, settings, times of day, and the rhythmic and tonal structure of evolving scenes and sequences.

“The workshop was really inspiring and warm-hearted. Virginia and Taren created an atmosphere in which we could really collaborate, work intensively, and share ideas freely. The workshop inspired me to develop my own film by moving between writing, piano improvisations, and abstract painting. This was an invigorating process that really worked to develop strong emotions, character moods and visual textures in the screenplay” – Rea Pihlasvilta, Filmmaker

“The workshop was an important step along the way of creative self-discovery for me, and I have used the method for two projects since then. It is especially helpful for kickstarting the creative process” – Synes Elischka, Filmmaker 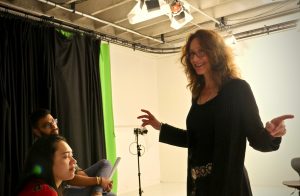 In 2012, Virginia ran an introductory improvisation workshop for film students at the Eastern Institute of Technology in Napier, Aotearoa New Zealand. Working with student scripts, she devised improvisations to explore back story, deepen characterisation and develop character dynamics. In this workshop, Virginia improvised alongside the film students, which made them feel more comfortable about trying it themselves.

“Virginia was incredible with our students, drawing on her vast knowledge of film craft as a writer/director to teach them how to flesh out and deepen characters through improvisation. I highly recommend working with Virginia; she is personable, refreshing, creative and inspirational. Thanks to her work with our students, they produced some of the best short films I was involved with during my tenure at EIT” – Jonathan Clark, former Lecturer, Eastern Institute of Technology 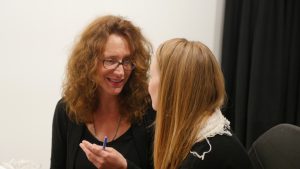 Following extensive use of improvisation during rehearsals with her own filmmaking, and collaborating with others on a devised screenplay, Virginia designed the module, Improvisation for Screen, for the University of Kent in 2012. It swiftly became the most popular module in the department and, because of its originality and positive impact on graduate careers, Virginia was awarded the Faculty of Humanities Teaching Prize.

“Virginia was friendly, approachable, always there to help. Her passion for the subject rubbed off on all the students”

“Teaching and practical sessions were fun, engaging and enlightening”

“I liked learning how to direct actors, with and without a script. I’ve learned that improvisation is an incredibly useful technique that I intend to use in future as it creates a real bond between actors and a better understanding and knowledge of their characters”

“Teaching on this module was great – Virginia is personable, knowledgeable and a really great person to be taught by. The module has instilled a passion for the subject and influenced my decisions for post-graduate study”

“The film screenings were brilliant, the module taught really well, the readings interesting and the assignments fun and challenging. The best module I have taken so far”